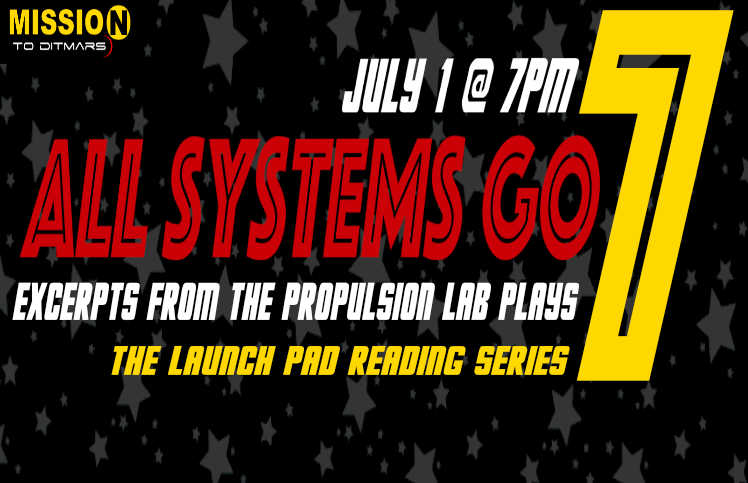 Mission to (dit)Mars is thrilled to announce All Systems Go: 7 as the culminating event for the LAUNCH PAD Reading Series this year.   This free play reading will be held at the RIOULT Dance Center at 34-01 Steinway Street in Astoria, Queens on Monday, July 1st at 7pm.

ALL SYSTEMS GO: 7 is an evening of excerpts from nine brand new plays by the Queens based writers group The Propulsion Lab.  The evening is presented by Mission to (dit)Mars co-founders Kari Bentley-Quinn, Don Nguyen, Meredith Packer, and Laura Pestronk.

All Systems Go: 7 will include excerpts from the following nine new plays:

GROUND EFFECT by Jonathan Alexandratos
Against the backdrop of an ever-growing forest fire threatening their Appalachian homes, Ciel and Phoebe bond over the things that only they can do.

END OF THE LINE by Megan Bussiere
It’s the 17th anniversary of 9/11, and four New Yorkers take their morning commute on the N train. One slice of time is broken open to reveal the common threads that run between all four.

THE SEDUCTRESS by Scott Casper
Welcome into our drag cabaret (featuring a certain presidential candidate), for a night of laughs, music, politics, and misplaced representation!

UNTITLED SCHOOL PLAY by Tim Errickson
A catholic school is closing its doors, and former students return to celebrate and mourn. The face the successes and failures of their education, and ghosts of who they were supposed to become.

HOMELAND INSECURITY by Lisa Huberman
It’s shortly after 9/11, and two teenage girls find themselves torn between allegiances.  Rachel’s favorite teacher pushes her to embrace a renewed sense of patriotism, while her Muslim best friend Sam is increasingly marginalized by xenophobic community members in their small Ohio town.

ME AND AC by Mrinalini Kamath
Mrinalini, Agatha, Miss Garble, and others attempt to solve the mystery of who killed the Colonel while simultaneously trying to untangle a skein of colonialism, racism, anti-Semitism, and Anglophilia.

THE LADIES ROOM by Sasha Sharova
The greatest acts of kindness can always be found in a women’s bathroom. But can they make up for everything that happens outside the bathroom’s door?

GHOST MONEY by Jason Tseng
A Chinese American family tries to excavate the truth about their matriarch’s unspoken experience on the front lines of the Chinese Civil War.

PLAYGROUND GAMES by Ray Yamanouchi
A group of third graders play a game to take over the playground.

To attend the reading, please make a reservation on our website:

Directions: Take the M/R to Steinway Station or the N/W to either 36th Avenue or Broadway.  Entrance on 34th Avenue.