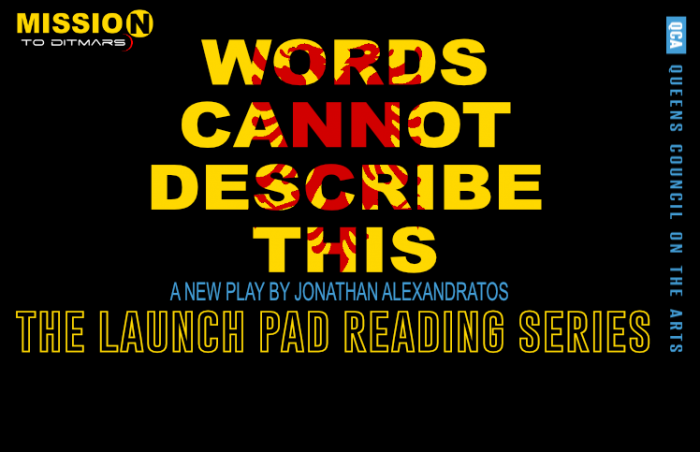 Mission to (dit)Mars is thrilled to continue the Launch Pad reading series with WORDS CANNOT DESCRIBE THIS, a new play by Jonathan Alexandratos and directed by Jessica Bashline.  This free reading will be performed on Monday, November 19th at 7pm at The Broom Tree Theatre located at 23-35 Broadway in Astoria, NY.

In WORDS CANNOT DESCRIBE THIS, O must flee her home country, Albania.  To do it, she’ll need the help of one asshole, one dead rabbit, three rando strangers, and one magical strawberry implanted in her brain.  This exciting new play asks what is home when home goes away?

“This is basically the story of my mom’s parents and their cousins who fled Albania for Greece, and then Greece for the U.S.” explains Jonathan.  “It’s not a happy story. It’s one that involves abuse, refugees, smuggling people, poverty, loss, war, and discrimination. Yet, it also involves me, and everything I’m able to do now, which I’m pretty happy about.“

The play was commissioned through a New Works Grant awarded by Queens Council on the Arts to create new work that speaks to the Queens community.

“I’m very lucky to have Mission to (dit)Mars co-supporting me with the QCA for this Launchpad Reading on November 19th.  When I proposed this play to the QCA, I described a piece that is at once Albanian, Greek, American, and, of course, Queens.”  adds Jonathan. “In Queens, and all across New York City, really, there is a massive population of Greeks and Albanians who arrived here, in many cases, because their homes were destroyed by war.”

The evening is presented by Mission to (dit)Mars co-founders Kari Bentley-Quinn, Don Nguyen, Meredith Packer, and Laura Pestronk.  It is made possible (in part) by the Queens Council on the Arts with public funds from the New York City Department of Cultural Affairs in partnership with the City Council.