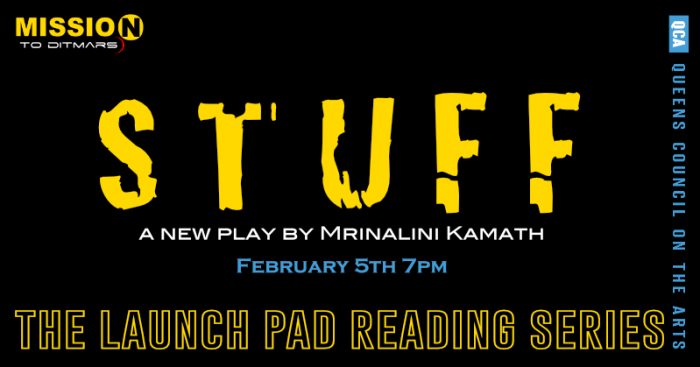 Mission to (dit)Mars is thrilled to continue the Launch Pad reading series with STUFF,  a new radio play by Mrinalini Kamath.  This free reading will be performed on Monday, February 5th at 7pm at The Broom Tree Theatre located at 23-35 Broadway in Astoria, NY.

Inspired by the NY Times article “The Lonely Death of George Bell,” STUFF tells the story of lives that intersect when a man dies alone in his cluttered apartment. A radio play about living alone in modern times.  STUFF is directed by Colette Robert and live foley provided by Tony Vo.

In describing the play, co-founder Laura Pestronk said “In STUFF, Mrinalini gets us down and dirty into the sometimes darkly comic, sometimes deeply melancholy world of hoarders. From the outside we may simply scoff at the piles of ‘garbage’ kept forever inside certain houses, but STUFF never lets us off the hook so easily.”

Kari Bentley-Quinn adds “We are presenting a brand new experience for Mission to (dit)Mars and our audience. Mrinalini has created a beautiful piece about loneliness, death, and what our material possessions that we leave behind say or don’t say about our lives”

On the unique nature of the play format, Don Nguyen explains “We wanted to immerse the audience in the world of this play which is why we decided to bring in a live foley artist to add that extra dimension to the night’s performance. It’s a whole different set of challenges than what we’re used to, but we’re up for it.”

Meredith Packer says “STUFF explores the conditions of human baggage, both physical and emotional, and how it affects our lives and those around us even after we are gone.”