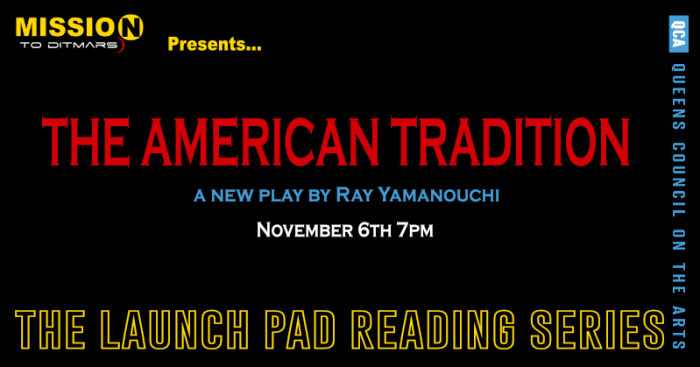 Mission to (dit)Mars is thrilled to continue the Launch Pad reading series with THE AMERICAN TRADITION,  a new play by Ray Yamanouchi.  This free play reading will be performed on Monday, November 6th at 7pm at The Broom Tree Theatre located at 23-35 Broadway in Astoria, NY.

THE AMERICAN TRADITION is a play set in Antebellum America.  Eleanor—cross-dressing as a white planter—and her husband, Bill—pretending to be her loyal servant—attempt to escape to the free state of Pennsylvania.  In hot pursuit of them is Walsh, a drunk planter and member of the Not All Slavers movement.  The play is directed by Axel Avin Jr.

Commenting on the play, co-founder Kari Bentley-Quinn says “With The American Tradition, Ray boldly examines the delicate and painful history of slavery in America while seamlessly connecting it to current political rhetoric. The play is at once horrifying, thought provoking, and laugh out loud absurd.“

Meredith Packer adds “Ray’s ability to make his audience look at the harsh truths of slavery in the 1800’s and it’s legacy of systemic racism today without preaching or pretense is proof of his deft writing ability.”

“The dialogue zips along while the tension sizzles in Ray’s American Tradition, and ridiculously funny moments still hit hard as this play fearlessly takes on the horrendous history of slavery and racism in our country.“ says Laura Pestronk.

To attend, please make a reservation on our website.

The Broom Tree Theater at