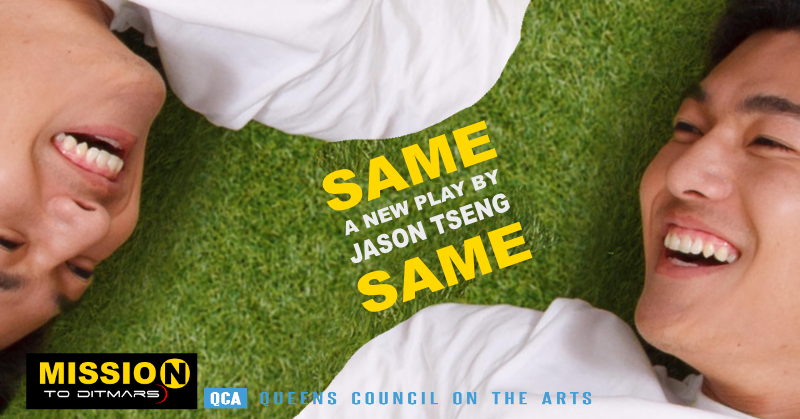 Mission to (dit)Mars is thrilled to continue the Launch Pad reading series with SAME SAME,  a new play by Jason Tseng.  This free play reading will be performed on Monday, August  21st at 7pm at The Broom Tree Theatre located at 23-35 Broadway in Astoria, NY.

SAME SAME is a queer Asian farce focusing on Kelvin and Victor’s relationship as their lives are turned upside down when Victor’s mother, June, makes an unannounced visit. Victor isn’t out yet, so they rent an apartment on AirBnB from Tristan in order to stage it as Victor’s apartment. Familial tensions flare as flames, new and old, threaten Kelvin and Victor’s relationship. Meanwhile, June grapples with her own secrets.

Commenting on the play, co-founder Meredith Packer says “It’s so exciting to be kicking off our season a bit early this year with Jason’s play. It’s fun, touching and a great way to bring us all back from the summer.”

Laura Pestronk adds “The amount of action-filled zany fun packed into this play has left me giddily enthralled since Jason first brought a few pages of it in for us to enjoy. Get ready to laugh, gasp, and not even begin to predict what might happen next.”

“Jason takes the structure of a traditional farce and puts a modern, diverse spin on it with hilarious and often touching results. ” said Kari Bentley-Quinn