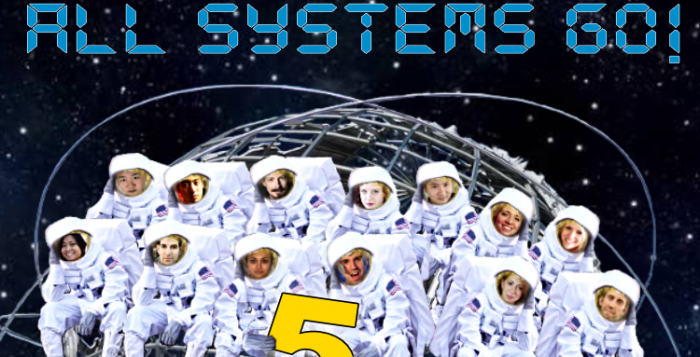 Mission to (dit)Mars is thrilled to announce All Systems Go: Mission 5 as the culminating event for the LAUNCH PAD Reading Series this year.   This free play reading will be held at the Astoria Performing Arts Center at 30-34 Crescent Street in Astoria, Queens on Monday, June 19th at 7pm.

ALL SYSTEMS GO: MISSION 5 is an evening of excerpts from nine brand new plays by the Queens based writers group The Propulsion Lab.   The evening is presented by Mission to (dit)Mars co-founders Kari Bentley-Quinn, Don Nguyen, Meredith Packer, and Laura Pestronk.  It is made possible (in part) by the Queens Council on the Arts with public funds from the New York City Department of Cultural Affairs in partnership with the City Council.

“Our writers have adeptly responded to the social and political issues happening right now with a diverse and stirring array of plays that examine so many aspects of our world today: sexuality, loneliness, race, class, religion and, above all, the importance of human connection.” said co-founder Kari Bentley-Quinn

Laura Pestronk adds “This year’s Propulsion Lab dives headfirst into the deep end, grappling with strong, scary subjects with grace and fearlessness and even hilarity. I’m proud of what is looking to be our no holds barred boldest All Systems Go yet!”

“I can’t believe we are at All Systems Go! year five. This is by far the most diverse and exciting grouping of excerpts we have been given to present and I am so excited to share it with our theater community here in Queens.” said co-founder Meredith Packer

All Systems Go! Mission 5 will include excerpts from the following eleven new plays:

On Parent/Teacher Conference Night at small, Southern elementary school, a parent, a teacher, and a really fucked up voice on the intercom clash over who has suffered the greatest pain.

“You’ve seen her before: the shy, quiet older woman making her way through life, doing her best to blend into the background. But Mary is about to learn there’s something special inside her; something that will have horrifying, deadly consequences for anyone who crosses her path.  MARY is a serialized audioplay told over twelve half-hour episodes.”

EARL: A SUICIDE by Tyler Rivenbark

In the Summer of 1985 Tyler was born. Less than a year later in the Spring of 1986 his grandfather killed himself. In the Spring of 2016 Tyler started writing Earl: A Suicide – a meta exploration of the thirty silent years in between.

Kelvin and Victor’s lives are turned upside down when Victor’s mother, June, makes an unannounced visit. Victor isn’t out yet, so they rent an apartment on AirBnB from Tristan in order to stage it as Victor’s apartment. Familial tensions flare as flames, new and old, threaten Kelvin and Victor’s relationship. Meanwhile, June grapples with her own secrets.

An artist embarks on a project to commemorate the anniversary grandmother’s death, and is forced to grapple with her own emotional inheritance.  A meditation on vintage clothes,  family guilt, and Old Testament angst.

Long days, sleepless nights, spit-up and poop and so many tears. This is Karyn and James’ new life as parents…will they survive it with their sense of selves intact?

THE AMERICAN TRADITION by Ray Yamanouchi

In Antebellum America, Eleanor—cross-dressing as a white planter—and her husband, Bill—pretending to be her loyal servant—attempt to escape to the free state of Pennsylvania.  In hot pursuit of them is Walsh, a drunk planter and member of the Not All Slavers movement.

LET THERE BE LOVE by Mrinalini Kamath

DeeDee, “The Goddess of Love,” an online dating and algorithm hater, runs a matchmaking agency with her son, Eric. A mash up of Sons and Lovers, the myth of Eros and Psyche and the dating app wars.

To attend the reading, please make a reservation on our website.

Directions: Take the N/Q to 30th Avenue. Walk down 30th Ave toward the Trade Fair Supermarket, continue past Mt. Sinai Hospital of Queens. Turn left on Crescent Street, then right on 30th Rd. The entrance is the second set of red doors on your left.