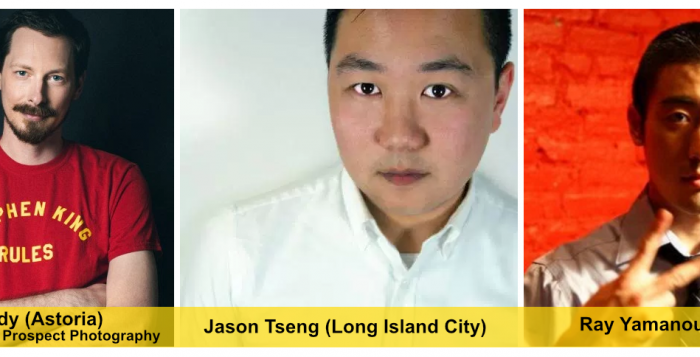 Mission to (dit)Mars is excited to announce the selection of three new members to the 2016-2018 Propulsion Lab, a Queens based writers group serving emerging playwrights from the borough.  In addition to the new lab members, three returning members have been named Writers in Residence and two have been named Orbiting Artists.

The three new Propulsion Lab members are Nat Cassidy (Astoria), Jason Tseng (Long Island City) and Ray Yamanouchi (Astoria).   For the Propulsion Lab, each playwright will focus on writing a new full-length play over the course of the year.  The new members were selected by Mission to (dit)Mars co-founders Kari Bentley-Quinn, Don Nguyen, Meredith Packer and Laura Pestronk.  The writers group meets bi-monthly in Queens.

On what excites her about the new members, Kari Bentley-Quinn explains “Each has a distinct voice and point of view, not to mention a ton of talent, and all three are a wonderful addition to our already exciting and diverse group of talented playwrights.”

Laura Pestronk adds “The talent pouring forth from the new labbers blew us all away, and we’re so happy to get to work with such diverse and lively new voices!”

Commenting on the returning lab members, Meredith Packer states “It’s such a privilege to meet with this group of writers each year. I am so excited to get in the room with our familiar and fresh faces and see what worlds we will explore together this year.”

The Propulsion Lab was created to meet the needs of like-minded theater artists who wanted to have a way of developing new work locally in Queens on an on-going basis.  In addition to bi-monthly meetings, the lab will include industry meet and greets with Artistic Directors and Literary Managers, three Launch Pad readings of full length plays, and All Systems Go! 5, an evening of excerpts from the new Propulsion Lab plays.

Writers in Residence positions are a way to address the growing needs of certain lab members who have been with us for some time by offering additional developmental support custom tailored to them. In exchange, our writers in residence act as artistic associates on Mission to (dit)Mars’ behalf and help our organization in certain capacities, such as reading script submissions.

Orbiting Artists are informal positions that allow current lab members whose availability has changed due to unforeseen reasons the chance to continue participating in the Propulsion Lab on a limited basis.

Nat Cassidy is an award-winning writer, actor, director, and musician.  He’s appeared in television shows such as “The Following” (Fox), “The Affair” (Showtime), “Red Oaks” (Amazon) “High Maintenance” (HBO), as well as numerous productions and workshops both Off- and Off-Off-Broadway. Nat’s plays have been nominated for a combined total of 17 New York Innovative Theatre Awards, including 3 times for Outstanding Full-Length Script (which he won in 2009, and in 2011 for Outstanding Solo Performance). His work has been seen throughout the country and is published by Samuel French, Smith & Kraus, NYTE, Applause Books, and Indie Theatre Now (where he is a bestselling playwright). In 2012 Nat was commissioned by The Kennedy Center to write the libretto for a world-premiere opera; and in 2014 his play Any Day Now was chosen to be part of Primary Stages’ ESPADrills (The Duke Theatre, directed by Moritz von Stuelpnagel). He’s an inductee in the Indie Theatre Hall of Fame, an NYTheatre Person of the Year, and was a finalist for the Doric Wilson Independent Playwright Award. www.natcassidy.com

Ray Yamanouchi was born in Queens, raised on Long Island, and received a BA in film and theatre from Hunter College in Manhattan. His plays include Tha Chink-Mart (PlayPenn 2018), Impact (Semi-finalist, National Playwrights Conference 2017), andThe American Tradition (New Light New Voices Award 2018). He has developed work with WT Theatre, Mission to (dit)Mars, The Blank Theatre, Rising Circle Theater Collective, Ars Nova, and Playwrights’ Center. You can find him online @NotoriousYAMs, or as the host of RE:, a NYC theatre talk show (www.retheatre.nyc).