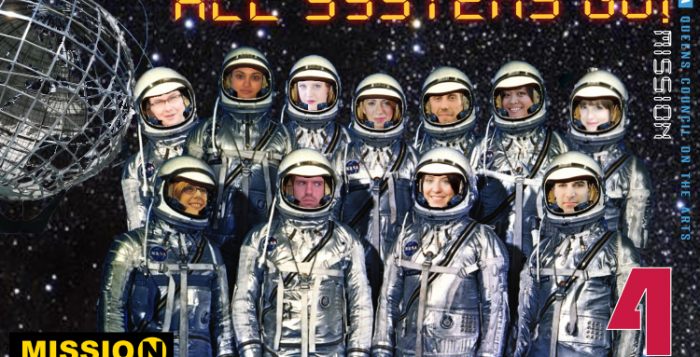 Mission to (dit)Mars is thrilled to announce All Systems Go: Mission 4 as the final event for the LAUNCH PAD Reading Series this year.   This free play reading will be held at the Astoria Performing Arts Center at 30-34 Crescent Street in Astoria, Queens on Monday, June 20th at 7pm.  To attend the reading, please make a reservation. In talking about this year’s lineup, Meredith Packer says “With eleven pieces, this is our biggest undertaking yet! I am so proud to be a part of the creation process and the presentation of our writers work to the Queens community. As our group grows so does our collective voice and that voice is strong and full of heart.”

“It’s especially exciting this year to watch many of our returning playwrights grow and develop such a varied body of work. The Queens theater community has become a force to be reckoned with!” adds co-founder Laura Pestronk.

Going into its fourth season of presenting new works in Queens, the small company takes a moment to reflect on the growth and changes over the past several years.  “I am beyond proud of our fourth season – not only are our playwrights diverse and talented – but their plays have really shown huge range and depth this year.” reflects Kari Bentley-Quinn.  “A lot of risks have been taken, and the payoff has been these enormously inspiring plays that will no doubt see a huge life after the Lab.”

On the returning playwrights, co-founder Don Nguyen adds “Carving out a space in Queens to allow our playwrights’ voices to evolve and witnessing first hand the challenging new works that have come out of the lab and seeing it shared not only across the country but in fact all over the world has been an extreme source of pride for Mission to (dit)Mars.”

All Systems Go! Mission 4 will include excerpts from the following eleven new plays:

WE SEE WHAT HAPPEN by Jonathan Alexandratos
Jonathan wants to perform his solo play about his grandmother’s immigration to the U.S. from Greece in 1951.  WE SEE WHAT HAPPEN is what happens when Jonathan’s grandmother and his old superhero action figures decide they’d better tell that story themselves.

JESUS PLAYS BASKETBALL ON A HOT NIGHT IN IRAQ by Tyler Rivenbark
Mom and Dad’s son committed suicide. Mom and Dad may or may not go to Dollywood.

ALARM by Scott Casper
A Groundhog Day social commentary, where everyday obstacles to equality are examined as the inescapable cycles of violence they really are.

SHADOWS by Elizabeth Seldin.
An exploration of the Peter Pan story as told by his Shadow and the untold story of his grief that makes the magic of Neverland possible.

THE NEW ISRAEL PLAY by Lisa Huberman
When Yael took a position at a small Midwestern Jewish Community after her Israeli army service, she had no idea what to expect.  As she struggles to fit into a very different version of Judaism than she is accustomed to, Yael forms an emotional bond with Tommy, the Native American IT guy at the JCC, who is wrestling with identity issues of his own.

BORN & RAISED by Kristine M. Reyes
Paul was adopted as a baby boy by a loving, caring, well-meaning white couple who raised him to be connected to his Chinese roots. Turns out, they were the wrong roots.

AIR (working title) by Amy Witting
Jo is stuck inside her one bedroom Sunnyside apartment with Pneumonia.  Expecting a grocery delivery she opens the door only to find surprise guests who refuse to leave.

[nbd] by Tori Keenan-Zelt
In conversation with MUCH ADO, [nbd] asks whether well-matched love can survive a world ruled by gender lines, high school hockey, and Internet selves.

LUCENT by Mac Rogers
Joan and Griffin’s relationship is treading water: no kids, bored with sex, bored with their jobs, borderline roommates. Until the day Joan steals a terrifying new technology from her employer that turns their slacker lives into a battleground of the unseen.

STUFF by Mrinalini Kamath
Elena’s late mother was left a lot of money by a man who died alone, and is apparently no relation.  Julius cleans out the apartments of dead people by day while trying to connect with live people at night.  Inspired by a NY Times article, STUFF looks at what it is we really want.

THE WORST MOTHER IN THE WORLD by Kari Bentley-Quinn
Nina is a new mom with an infant son, battling crippling anxiety attacks that are keeping her from being the mother she wants to be. When she decides to seek therapy, she makes an unexpected friend in the pregnant daughter of her therapist, who may or may not be a pathological liar.

Directions: Take the N/Q to 30th Avenue. Walk down 30th Ave toward the Trade Fair Supermarket, continue past Mt. Sinai Hospital of Queens. Turn left on Crescent Street, then right on 30th Rd. The entrance is the second set of red doors on your left.