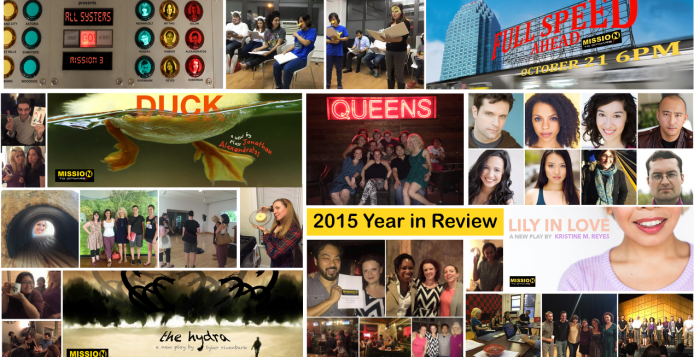 A lot can happen in a year, especially in Queens.  Here’s a look back at what we accomplished in 2015:

We featured ten new artists on our popular Featured Artists section.  Click here to read up on their reasons for loving Queens and their favorite places to eat and drink.

Going into our third year of producing an audience favorite, our night of excerpts from the Propulsion Lab ALL SYSTEMS GO: MISSION 3 was a huge success!  Click here for more photos

Rehearsal for PERSEPHONE by Lisa Huberman

Cast of All Systems Go: Mission 3

Co-founder Laura Pestronk peeking through one of the sculptures

Emily Herzlin leads a group discussion about mindfulness and writing
We continued our popular mindful writing series (lead by Emily Herzlin) with POETRY IN STONE at the Noguchi museum in Astoria.

This year we held our first ever fundraiser!  The evening was hosted at Sek’end Sun.  There was lots of fun and lots of raffle prizes awarded.

And because we are crazy, we decided to hold another Launch Pad reading barely two weeks after our fundraiser! Our final reading for 2015 was Jonathan Alexandratos’ new play DUCK November also kept us busy with a second reading of LILY IN LOVE, hosted by the New American Voices reading series at Queens Theatre.

We closed out the year with a holiday party for our Propulsion Lab playwrights!

Everyone swarmed around Kristine and Jason’s newest addition: Keilani

Scott Casper shows off his presents

Mrinalini Kamath shows off her present

Mission to (dit)Mars was created by four people who love Queens and it has been sustained throughout the year by all of you.  Thank you so much for making 2015 such a productive and artistically rewarding year for us.  We couldn’t have done it without you!  We’ve managed to accomplish all of this with very little money.  If you’d like to support us, click here to find out the best way to do so!