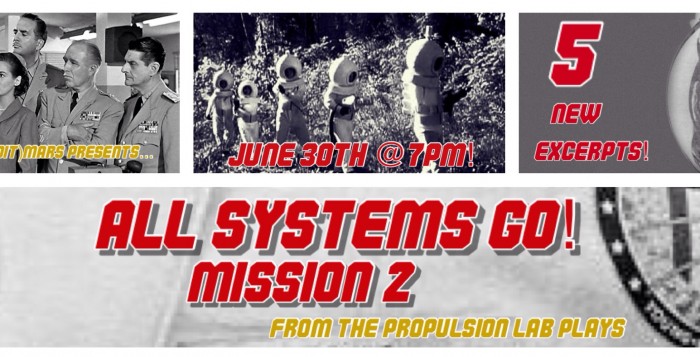 ALL SYSTEMS GO: MISSION 2 is an evening of excerpts from five brand new plays by the Queens based writers group The Propulsion Lab.  Participating Queens based playwrights for this event are Lisa Huberman, Kristine M. Reyes, Tyler Rivenbark, Mariah MacCarthy, and Don Nguyen.

A reception will be held following the event, where beer and wine can be purchased.

Excerpts will appear from the following five new plays:

Lily is a good Catholic Filipina daughter who’s always known exactly what to do with her life — until she falls in love with a woman. Lily’s life just got complicated.

You Like It
by Mariah MacCarthy
directed by Kel Haney

Ganymede is “new in town,” and Orlando won’t shut up about his ex-girl Rosalind.  Secrets, gender, forbidden love: this bromance is about to get real.  A queer riff on a classic.

The Hydra
by Tyler Rivenbark
directed by Aimee Todoroff

Through an amalgamation of Greek and American folk tales, The Hydra finds Iraq War Veteran, Stephen Ajax, in a netherworld inhabited by Gods, Goddesses, and puppets to face the aftermath of his former life.

Hello, from the Children of Planet Earth
by Don Nguyen
directed by Kristin McCarthy Parker

On the eve of the spacecraft Voyager 1’s crossover into interstellar space, William gets a phone call that will possibly change his life forever.

This free play reading will be held at The Secret Theatre located at 4402 23rd Street in Long Island City on Monday, June 30th at 7pm.

To attend the free reading, please make a reservation on our website: http://missiontoditmars.wordpress.com/reservations/

Lisa Huberman (Woodside) Lisa’s work includes Egyptology (developed under the mentorship of Lee Blessing and a nominee for a National New Play Network award), Under the Rainbow (Regional Winner in the Kennedy Center American College Theatre Festival, Finalist for the John Cauble Short Play Award), Health Nuts (Semi-Finalist for the Little Fish Theatre Pick of the Vine Competition, produced by the Panic Room Playwrights), Life Play (Secret Theatre’s Act One: One Act Festival), Sub-Prime (KNOW Theatre Playwrights and Artists Festival), High and Uptight (Mile Square Theatre’s 7th Inning Stretch Festival) and Heart/Succor (La Petite Morgue’s inaugural Fresh Blood Series).  She has participated in the One Minute Play Festival, Pussyfest, and Monologues and Madness.  Under the Rainbow, High and Uptight, and Egyptology are available for purchase and download at The Monologues Database.  A member of The Dramatists Guild, Drawing Board, The Panic Room Playwrights, Lisa is also an Artistic Associate for La Petite Morgue.  She has attended playwriting workshops at Kennedy Center Playwriting Intensive and Chicago Dramatists.  She received her BA in Theatre Performance from Bradley University and her MFA in Playwriting from Rutgers University, where she currently teaches freshman composition.  Lisa was raised by vegetarians in Ohio and also maintains the food blog, Sometimes A Vegan.

Kristine M. Reyes (Astoria) is a playwright raised and based in New York City. Her plays include the full-length Queen for a Day(Diverse City Theater Company’s First Draft Fellowship); one-acts Quarter Century Baby, Something Blue (both produced at Diverse City Theater Company) and Lola Luning’s First Steps (commissioned and produced by Women of Color Productions); and the ten-minute pieces Balikbayan Birthday (Leviathan Lab) and Ready, Aim…Fire! (ESPA at Primary Stages; published on Indie Theater Now).  Kristine is a Playwright Associate at Diverse City Theater Company, and a founding member and former co-director of the Leviathan Lab Asian American Women Writers Workshop. She was a 2012 Mary Louise Rockwell Scholar at The Einhorn School of Performing Arts (ESPA) at Primary Stages, and has also studied at Ensemble Studio Theatre. She is a member of The Dramatists Guild.

Tyler Rivenbark (Sunnyside) Tyler was born and raised in Warsaw, North Carolina, and is now based out of Sunnyside, NY. He is a graduate of the Queens College, CUNY, MFA program in Creative Writing and Literary Translation with a focus in Playwriting.  Select plays include Monosyllabic (Mellow Pages), (Silence) (Dixon Place and Artists’ Bloc), Inside the Rain (Dixon Place), Frogs; or How to Fail at Business (Left Hip), How they Played Games and Fell in Love (Abingdon Theatre) and Joe (Short Play Lab). In 2012 he received a commission from the Poetry Society of America to adapt Rita Dove’s Pulitzer Prize-winning book Thomas and Beulah for the stage. In 2011 he founded the Oh, Bernice! reading series in Queens. He was a 2009 writer-in-residency at the Louis Armstrong House Museum, a residency he now oversees. He is currently an English professor at Queens College, CUNY. He is also a member of the Dramatist Guild. And when not making theatre, he can be found around the city making music.

Kristin McCarthy Parker (Astoria) is a Queens-based director and sometimes actor. Her directing work includes Bears (59E59), kumrads won’t (FringeNYC), All’s Well That Ends Well (Mad and Merry), and the upcoming spoof Hold on to your butts: the Jerassic Parque Experience. She has developed a variety of new work with Amios’ Shotz! (penned by Mat Smart, Sevan K. Greene, Lindsay Joy, and others) and assisted under Ed Iskandar (The Mysteries), Michael Greif, Trip Cullman, Wendy Goldberg, and Jenn Thompson. Kristin is a graduate of The University of Evansville.

Aimee Todoroff is the Artistic Director of Elephant Run District, and indie theatre company based in NYC, where she helmed the popular Brecht in the Park, the Stampede Lab Series and American Gun Show, among others. She has directed at Primary Stages, The Living Theatre, HERE Arts Center, 59E59, The Metropolitan Theatre Company and others, and has directed the premieres of works by Cusi Cram, Daisy Foote and Chris Harcum, including Green, We Haven’t Told Anyone About This Yet and Rabbit Island, a Backstage Magazine’s Critic’s Pick and a “best of” the 2012 Frigid Festival.  Recently, Aimee served as the Assistant Director under John Rando for David Ives’ new play The Heir Apparent at Classic Stage Company. Aimee received her MFA from Southampton Arts. www.aimeetodoroff.org

THE LADIES ROOM by Sasha Sharova