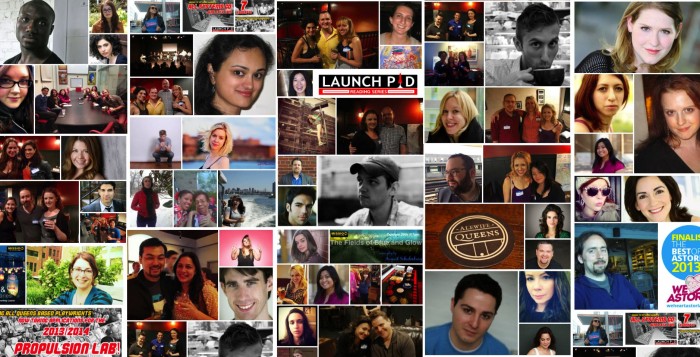 A lot can happen in a year, especially in Queens.  Here’s a look back at what we accomplished in 2013: Also in April, the amazing We Heart Astoria blog named Mission to (dit)Mars one of the finalists in their annual The Best of Astoria Readers Poll!

If you know Mission to (dit)Mars, then you know we love hosting mixers!  In May we held our Spring Fling Mixer at Open Door Restaurant in Long Island City.

We followed that up in June with an evening of excerpts from our Propulsion Lab Group (All Systems Go!)

We didn’t take a break over the summer.  Instead, we launched a summer Mindful Writing Workshop led by Emily Herzlin that took you all over Queens, starting at Gantry Plaza State Park in Long Island City, on the subway (N/Q Train!) and concluded at Martha’s Bakery on Ditmars!  Mission Accomplished!

We wrapped up our Launch Pad Reading Series with a brand new play The Fields of Blue and Glow by August Schulenburg, continuing our mission of not only championing new plays, but also exploring all parts of Queens by presenting the reading in the beautiful carriage house at LIC Bar.

The Propulsion Lab kept busy throughout the fall working on brand new plays!  We also found time to take a field trip to The Public Theater!

And last but certainly not least, we were proud to feature 23 new Queens artists on our website throughout the year!  You can read up on all of our featured artists here.

Mission to (dit)Mars was created by four people who love Queens and it has been sustained throughout the year by all of you.  Thank you so much for making 2013 such a productive and artistically rewarding year for us.  We couldn’t have done it without you!  We’ve managed to accomplish all of this with very little money.  If you’d like to support us, click here to find out the best way to do so!