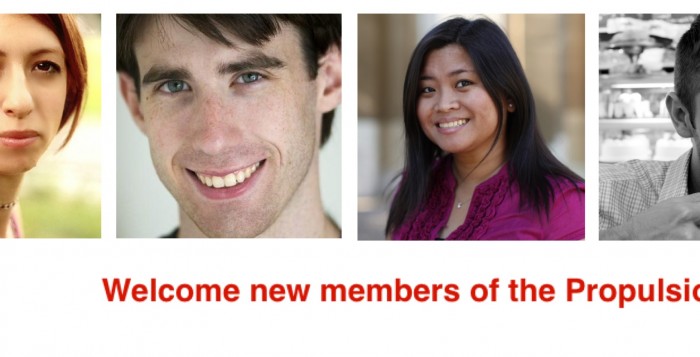 The four new members are Lisa Huberman (Woodside), David Lawson (Astoria), Kristine M. Reyes (Astoria) and Tyler Rivenbark (Sunnyside).  Along with current members of the Propulsion Lab, each playwright will focus on writing a new full-length play over the course of the year.  The new members were selected by Mission to (dit)Mars co-founders Kari-Bentley-Quinn, Don Nguyen, Meredith Packer and Laura Pestronk.  The writers group meets bi-weekly in Queens and is facilitated by Kari Bentley-Quinn and Don Nguyen.

On what excites her about the four new members, Meredith Packer explains “I was so excited by not just the high level of work they submitted to us, but how incredibly different each of the writers are in their approach, styles and voice.  I thought that combination of diversity and work would be great to get to the table.”  Kari Bentley-Quinn adds “I think the most exciting thing for us was finding four voices that are all very different from each other.”

“The plays that caught my attention were the ones that were both well-written and moving,” said Laura Pestronk, explaining how the members were selected.  “I was looking for a firm grip on style that caused me to feel something and hopefully either shake me inside or make me laugh out loud or both.”

The Propulsion Lab was created to meet the needs of like-minded theater artists who wanted to have a way of developing new work locally in Queens on an on-going basis.  “The first year we did this Lab, we had such an extraordinary response to it. The writers were really happy, and our end of the year presentation ALL SYSTEMS GO! was a sold out house” said Kari Bentley-Quinn.

For more information and bios of each of the Propulsion Lab members past and present, please visit this link.

Lisa’s work includes Egyptology (developed under the mentorship of Lee Blessing and a nominee for a National New Play Network award), Under the Rainbow (Regional Winner in the Kennedy Center American College Theatre Festival, Finalist for the John Cauble Short Play Award), Health Nuts (Semi-Finalist for the Little Fish Theatre Pick of the Vine Competition, produced by the Panic Room Playwrights), Life Play (Secret Theatre’s Act One: One Act Festival), Sub-Prime (KNOW Theatre Playwrights and Artists Festival), High and Uptight (Mile Square Theatre’s 7th Inning Stretch Festival) and Heart/Succor (La Petite Morgue’s inaugural Fresh Blood Series).  She has participated in the One Minute Play Festival, Pussyfest, and Monologues and Madness.  Under the Rainbow, High and Uptight, and Egyptology are available for purchase and download at The Monologues Database.  A member of The Dramatists Guild, Drawing Board, The Panic Room Playwrights, Lisa is also an Artistic Associate for La Petite Morgue.  She has attended playwriting workshops at Kennedy Center Playwriting Intensive and Chicago Dramatists.  She received her BA in Theatre Performance from Bradley University and her MFA in Playwriting from Rutgers University, where she currently teaches freshman composition.  Lisa was raised by vegetarians in Ohio and also maintains the food blog, Sometimes A Vegan.  Website:  http://lisahuberman.blogspot.com

Lawson’s plays have been produced at/by The Brick Theater, Dixon Place, IRT Theatre, the Secret Theatre, the Downtown Urban Theater Festival (at Manhattan Movement & Arts Center), The FRIGID New York Festival (at UNDER St. Marks), The Dream Up Festival (at Theater for the New City), Alchemical Theatre Laboratory, the Brooklyn LaunchPad and The Parkside Lounge. Lawson holds a Bachelor of Arts in Theatre from Emerson College (MA) and studied at the O’Neill National Theater Institute (CT). Lawson is a proud member of The Dramatists Guild of America and the League of Independent Theatre of New York.  Website: www.dtlawson.com

Kristine M. Reyes is a playwright raised and based in New York City. Her plays include the full-length Queen for a Day(Diverse City Theater Company’s First Draft Fellowship); one-acts Quarter Century Baby, Something Blue (both produced at Diverse City Theater Company) and Lola Luning’s First Steps (commissioned and produced by Women of Color Productions); and the ten-minute pieces Balikbayan Birthday (Leviathan Lab) and Ready, Aim…Fire! (ESPA at Primary Stages; published on Indie Theater Now).  Kristine is a Playwright Associate at Diverse City Theater Company, and a founding member and former co-director of the Leviathan Lab Asian American Women Writers Workshop. She was a 2012 Mary Louise Rockwell Scholar at The Einhorn School of Performing Arts (ESPA) at Primary Stages, and has also studied at Ensemble Studio Theatre. She is a member of The Dramatists Guild.

Tyler Rivenbark was born and raised in Warsaw, North Carolina, and is now based out of Sunnyside, NY. He is a graduate of the Queens College, CUNY, MFA program in Creative Writing and Literary Translation with a focus in Playwriting.  Select plays include Monosyllabic (Mellow Pages), (Silence) (Dixon Place and Artists’ Bloc), Inside the Rain (Dixon Place), Frogs; or How to Fail at Business (Left Hip), How they Played Games and Fell in Love (Abingdon Theatre) and Joe (Short Play Lab). In 2012 he received a commission from the Poetry Society of America to adapt Rita Dove’s Pulitzer Prize-winning book Thomas and Beulah for the stage. In 2011 he founded the Oh, Bernice! reading series in Queens. He was a 2009 writer-in-residency at the Louis Armstrong House Museum, a residency he now oversees. He is currently an English professor at Queens College, CUNY. He is also a member of the Dramatist Guild. And when not making theatre, he can be found around the city making music.

THE LADIES ROOM by Sasha Sharova