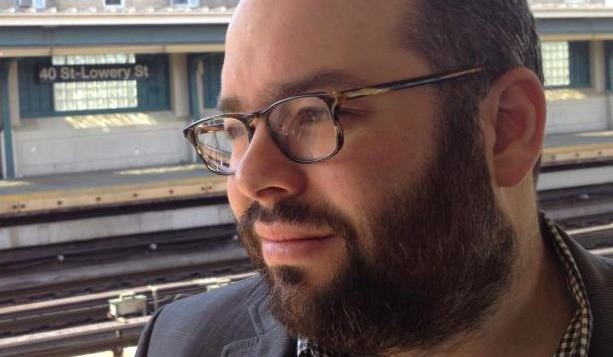 Which Queens neighborhood do you live in and for how long?
My wife Jenna and I moved to Sunnyside almost six years ago. She wasn’t my wife then, but she’s my wife now. We like it here.

How did you get involved in theater?
I always wrote stuff. I wrote little books and songs and raps when I was a kid (like you do), and in high school I wrote a lot of poetry. In college while studying screenwriting, I learned how to play the guitar, so I also started writing songs. I’ve always had sort of a short attention span, so I started reading plays, because unlike a novel, you can read them in one or two sittings. For some reason, I liked the idea of being a playwright. I wrote a play about a drugstore (I worked in a couple of them during and after college) and used that to apply to grad school. I got into a few and went to one, and while there, I found that if you called yourself a playwright long enough, eventually you would become one.

And then I wrote my first musical in 2007 while in Youngblood at Ensemble Studio Theatre and realized that was probably what I was born to do. I wrote many more after that. And the rest is the present.

What do you love most about Queens?
Sunnyside is great. It’s a real neighborhood. It’s small and it’s incredibly diverse. There are families and young people and old people and middle aged people. My wife and I know the people who work at the diner, the fish store, the thrift store, the laundromat, and all that. We talk to them and we’re not even that friendly (we’re both shy writer types).

I love that we are able to live in New York and live in a rent stabilized two bedroom apartment—with one room to sleep in and the other for us both to write and for me to write songs and play musical instruments and procrastinate.

What I love most about Queens is that it’s in New York City. I really like Queens, but I love New York.

I will limit this to Sunnyside/Woodside food places.  I write what I know.

In no particular order…

There are also plenty of bars and Irish pubs if you’re into that sort of thing, but all beer tastes the same to me.

Current/Upcoming projects?
Director Wendy Goldberg and I are presenting my hip hop basketball musical DUNKFEST ’88 as part of Ars Nova’s ANT Fest on June 15. Come see it!I am appeared on a panel with Diana Son and Itamar Moses called “Playwrights Writing for Television: Success or Compromise” at the Martin E. Segal Theatre Center on May 20th; I haven’t yet compromised as much as I would like, but I plan to compromise more and more.