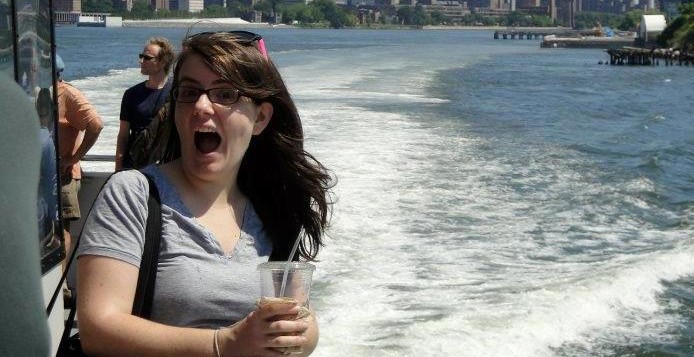 Which Queens neighborhood do you live in and for how long?
I’ve lived in Long Island City since September of 2009.  So, three and a half years.  Math!

How did you get involved in theater?
I went to a high school for artsy weird kids that had a very adventurous theater department.  We did The Laramie Project and The Mystery of Edwin Drood and a weird interpretation of The Wizard of Oz where Glinda was some kind of swami and the Munchkins were baby chickens.  I acted (I played the Jim Norton role in Edwin Drood–OBVIOUS typecasting!) and stage managed and wrote plays and directed and it was all awesome.  Our drama teacher was very encouraging but also made us be professional, which I think held us all in very good stead.

What do you love most about Queens?
You can basically do anything in Queens: you can go to the beach, or go to a movie, or go to a play, or go to a beer garden, or go to a graffiti museum, or go to Costco.  And you never have to leave Queens!  Also, the 7 train is the subway line that feels most like the Big Thunder Mountain Railroad ride at Disneyland, once it goes above ground.

Do you have any “only in Queens” moments you’d like to share?
My boyfriend and I read the New York Times’ “36 Hours in Queens” and decided that we needed to try the Uzbek food they mentioned.  So we went to Forest Hills one night to a place called Cheburechnaya and had these amazing fried dough empanada-like things filled with potatoes and meat, and huge kebabs on skewers.  I think we were the only non-Uzbek people there.  And the TVs were playing YouTube videos of MMA fighters.

There are just so many good restaurants.  In LIC alone we have a bunch of favorites, including Cyclo (Vietnamese), Cafe Enrique (Mexican), Sage General Store (it was on Diners, Drive-Ins, and Dives!), Manetta’s, Manducati’s (both old-school family-owned Italian), and the Transylvanian Chimney Cake place (seriously, this exists!).  I recently went to Sik Gaek in Sunnyside (amazing Korean food in giant pots, and soju in a carved-out watermelon), and I love SriPraPhai (Thai food) as well.  Try the ribs.

Current/Upcoming projects?
I’m currently rehearsing a show for The 52nd Street Project: it’s a ten-minute play in an evening of one-acts written by ten-year-olds entitled Stand By Me: The Reliable Plays.  The play I’m directing is called Death of a Million, and features an FBI agent and a 9-year-old ghost.  The shows are fabulous and free!  And in April I start work on There’s a Light on Yonder Mountain, a brand new play at Under St. Mark’s produced by aMios (www.amiosnyc.org) and co-written by four amazing playwrights.